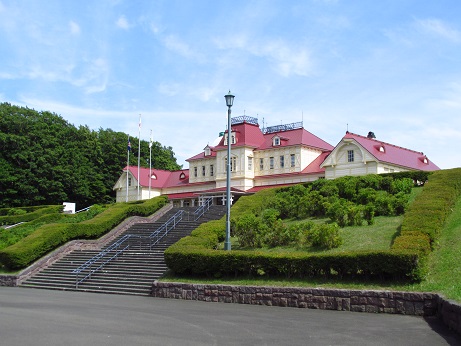 I’ve been to Sapporo twice now, and while I’ve tried to see or experience new things both trips some things were bound to overlap. One of those things was a visit to the Pioneer Village.

Exactly as it sounds, this is a little town recreated to give you an idea of what it must have been like for the Japanese when they first began to explore Hokkaido. There are little houses, school buildings, shrines, fishing huts, the whole shebang. Its an impressively big place, and I would recommend you plan to be there for at least half a day. (Admittedly not only for the sightseeing but also because of the buses being somewhat infrequent…)

Upon entry, you’re greeted by several buildings all with their doors wide open. I entered one at random to get my little personal tour started. While a lot of signs were in English, most were (nautrally in Japanese). I decided to puzzle some of them out for funsies when an older gentleman in a volunteers’ vest approached me. He was frail, dressed far too nicely for such warm weather, and had a slight hunch in his shoulders.

“What do you think about it?” he asked in Japanese, gesturing toward the sign I was reading.

“Pretty interesting stuff,” I responded in the same language.

He lit up, and proceeded to speak at full speed. While I couldn’t catch every word, I imagine he was saying something like this:

“Oh, good, you can understand! Well anyway, I’d like to share some information beyond what the sign says. On this date, this person arrived in Sapporo and he did this thing that resulted in…”

I nodded here and there, made interested noises, and said, “Well thank you for the explanation. I’m going to the next building now.” After all, while I appreciated his enthusiasm, speaking with someone and trying to keep up with their Japanese was not on my list that day.

The volunteer, however, had other ideas. “Oh, wonderful! I’ll accompany you!”

“Nonsense, I’m here to help anyone who comes in. Let’s go!’

Resigned to my fate, I followed him out the door to the next building, and for the next few hours got far more information on everything in that Village than I ever needed to know.

The gentleman was beside himself with excitement, nodding to other volunteers and saying, “SHE speaks Japanese,” as if he himself had taught me.

When the other helpers expressed their astonishment, I interjected with, “Only a little, I’m still studying.” However, this seemed to ensure that yet more of them wanted to help the foreigner with her adventure, and we soon were a party of four: the gentleman, a younger man in traditional clothing, and an older woman. We proceeded to tour every single building. Place to place we went, staring at signs I could barely read and discussing topics I almost couldn’t follow at all.

Several times, I wish I had played the role of the foreigner who didn’t understand, but as we got further and further into this adventure I realized it probably wouldn’t have mattered; these people were so excited to share their history with me that I probably could have walked in speaking something really obscure, and they would have still dropped everything to assist me. It was inspiring, and very sweet… but considering I’d been hoping for a quiet day wandering around and reading things on my own, I was not mentally prepared for such helpfulness.

That said, the Village was far larger than I’d anticipated, and a lot of what we saw was fascinating; the signs I could read told me what I was looking at, whether it was a school (where volunteers were singing traditional songs) or a fishing hut. I will say one word of warning to visitors, aside from the super helpful people: there are mannequins and fake horses. Everywhere.

It doesn’t help that there are recordings that start up when the motion detectors pick up your entrance to a particular building. One minute you’ll be peering into a quiet little house and the next, you’ll be hearing an involved discussion in Japanese coming from nowhere!

At last, we wound up sitting in one of the traditional fishing village houses on the edge of the attraction, sipping hot green tea, when my phone went off. I checked it and saw that the next bus was due in about a half hour. Time to escape.

“Oh, my bus is coming soon,” I said, slowly starting to get up. “I’d better head for the entrance. Sorry to cut this short.”

“Your bus? Oh, you should have said you needed to get on a particular bus! We’ll lead you to the entrance!” my gentleman of a volunteer exclaimed, scrambling to his feet.

“No need, I can find it myself,” I said. “Besides, you’ve all been so helpful along the way that I couldn’t ask you to do any more.”

“Look, you haven’t even finished your tea. I really appreciate it, but I don’t want to put you out. Thank you all so much.” I bowed.

That got everyone scrambling up to bow back at me, thanking me for coming to Pioneer Village. We bowed back and forth a few times, and each time I backed a bit further out toward the door. Toward freedom. They inched closer each time, still offering to help me find the entrance.

I fled, but not before peeking at one or two attractions just one last time: 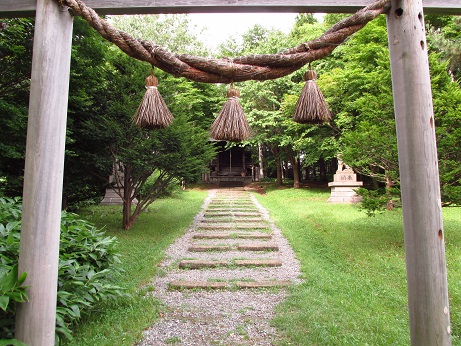 The Pioneer Village is a lovely place, and I highly recommend you go. Just beware the automated recordings and the hospitality! 🙂

Moral of the story: I need to learn how to say “no thank you” to enthusiastic volunteers without feeling like a jerk.

At long last, I can walk outside without feeling like I’m swimming through (and attempting to breathe) soup. While it’s still a bit too warm for my tastes, I’ll take it if it means that we’ll be heading into fall soon- which we should be before long!

The shops are already preparing for autumn and winter. The coffee shops are selling apple and pumpkin everything, the clothing stores are selling sweaters on sale, you name it. One thing that has intrigued me in particular is the growing amount of cheap, Halloween-related goods.

Halloween is not something Japan really recognizes. While Japan in general seems aware of the holiday, and people get that you tend to dress up in costumes and eat candy, most folks wouldn’t know where it originated from or why westerners are such a fan of the day. Yet every fall that I stay in Japan, I start to notice little changes related to Halloween.

Five years ago, you could get witch hats, capes, and fake pumpkins at the 100-yen stores. If you wanted anything more elaborate, you could try a department store–and pay 5,000 yen for a pirate hat. These days, the 100-yen stores offer several shelves’ worth of decorations, a variety of witch hats and cat ears. The department stores, meanwhile, still have that pirate hat; but they also offer candy, full costumes for men and women as well as kids, makeup, masks, the whole shebang.

I imagine we can thank the rising population of westerners in Japan for that, but it’s intriguing to watch something become much more accepted and known in Japan over such a “short” period of time.

Living in Japan brings many questions to people’s minds, often sending them into culture shock. Things like why do the people on TV shows overreact to every dish with a gasped, “Umai!” with tears in their eyes. Or why there are so many layers of plastic between you and the one thing you bought at the department store.

But as I continue to live here, I can’t help but begin to notice the things that are unique to Kyoto itself. With the help of a few friends, I’ve begun to collect these questions.

No doubt many of them have mundane answers that will make perfect sense, but they’re fun to think about regardless!

Here are a few for your imaginative pleasure:

-Occasionally, a giant plastic cake can be seen lurking on the Kamogawa. What is its story? What prompts it to appear?

-Why are the festivals in Kyoto at such odd times? More importantly, do the people who participate in the festivals get special leave, or do they have to use their regular leave?

-Why is Jingu-Marutamachi station on the Keihan line so very haunted?

-What in particular summons the Welcome to Japan man? What about a given foreigner compels him to appear, in some cases multiple times, to the same person?

I’ll address some of these in more detail in future posts, but think about them and give me your best theories, whether you’ve experienced these phenomena firsthand or not!