The last time I went to Iga-Ueno to check out the ninja museum there, I went on my own and stayed only long enough to wander the grounds and see the museum itself. This, I have decided, is a tragedy–one I’m glad I corrected, because there is plenty to do in this place.

Iga-Ueno is a haul from Kyoto. Assuming you start at Kyoto Station, you’re looking at a 2-hour train ride. If you pile into a car, you’re looking more at around 90 minutes if the traffic isn’t bad. So if you’re going, plan to be out there all day so you don’t wear yourself out! During this trip a friend was kind enough to drive me and a few others out there and back. Along the way we saw some… fascinating things. Like an egg vending machine. Just 300 yen (about $3 USD, give or take) and you could have half a dozen of fresh, local chicken eggs! We decided against it since we were traveling.

Our main goal in Iga-Ueno was to check out the Ninja Museum. It’s multi-level; on the outside, all you see is an unassuming, old-style Japanese house. Upon entering, you are led on a tour of the house, where a guide explains how ninjas used to protect people or attack their targets. It doesn’t take long- maybe 20 minutes. Once done, you are led to some stairs that take you down to the proper museum itself. There are explanations and signs in English everywhere, so if your first language isn’t Japanese, you can still get an inkling  of what you’re looking at!

You can buy the museum ticket on its’ own, but there’s a package deal for about 1,500 yen where you can gain entry to the museum, Ueno Castle, and the Danjiri Kaikan, all of which are in easy walking distance.

But that’s not all… how would you like to see a ninja show? 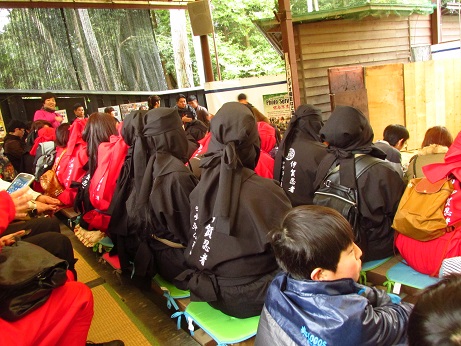 The show costs an extra 400 yen or so, but it’s the best 30 minutes you will spend in your life. We couldn’t take photos during the performance, but I got a shot of the audience beforehand. Can you see all the ninjas? They must be new at their job… Anyway, you get to see demonstrations of different weapons and attacks from three or four main people, with explanations in English and Japanese (and, if you come with a tour group, another language of your choice. Many of the folks we saw there were part of a Chinese group, and their guide translated everything.)

Keep in mind, however, the translation is not always perfect. I was amused to listen to the Japanese and English versions, because sometimes things like this occurred:

Japanese explanation: We will now show you how ninjas hid weapons in various articles of clothing, from their shoes to their hats. Take this straw hat, for example; there are multiple weapons hidden underneath for the ninjas’ convenience.

English explanation: THIS… is a secret hat.

But you will still get the general idea from the demonstrations if nothing else!

When we finished with the show, we paid an extra 300 yen to get a group shot with the ninjas. This is completely optional, but we enjoyed the show so much we felt like we needed to. Especially with Mr. Secret Hat.

Once done, we headed straight for the castle. There are some steep/uneven stairs, but overall it was a pleasant enough addition to our trip. The outside was lovely, and inside it had a great view of the surrounding area, as well as some interesting interior decoration choices. I’ll let you all go and check it out yourselves to see what was so fascinating. 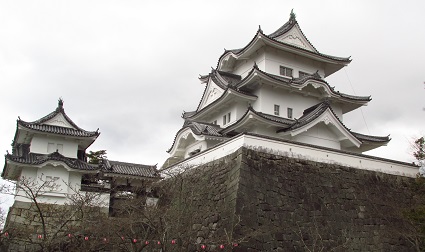 From there, we went on to the Danjiri Kaikan, a building where you can see the festival floats used in the local matsuris. It’s worth a stop to check out, especially if you’re not staying in Japan long enough to watch the festival parades yourself (or won’t be in the right place at the right time for one). They play a video of the festivities several times during the day. Most of the written explanations for each float are in Japanese, but there should be English brochures available!

Our last activity that day were checking out the Basho Memorial. This too was an additional couple hundred yen, and honestly it’s a bit difficult to appreciate if you are not fluent in Japanese. English handouts with translations of each displayed poem are available, though, so if you’re a keen Basho or poetry fan, it might be worth going to. The place was near-silent when we walked in, like a library, and a few people were milling around. As we checked out the papers, one of my friends sniffed the air a few times, a puzzled expression passing over her face.

“Is it me, or does this place smell like a church?” she asked.

It certainly did, and it had the hushed reverence of one too. We spent a good half hour or so checking out what was on display, reading the English and trying to puzzle out the characters written on the original pieces. I’ll admit poetry is not my thing so I personally would have skipped it, but again, if you’re a big fan, do check it out!

All in all our sightseeing took us 3-4 hours and lunch thrown in was another hour or so. While lunch was not particularly memorable, we had several snacks throughout the day from the same set of snack stands. There were a lot of standard festival options there, from taiyaki to takoyaki and bananas dipped in chocolate, etc. etc.

I will say one thing: if you want to buy souvenirs, go ahead and buy them where you see them. Especially if you’re at the ninja museum and perusing the goods, go ahead and get ’em because that is the only place you’ll see them! Many places in Japan have the same goodies in multiple shops, but this is not one of those times.

Overall, I would happily go there again sometime in the future, but before that… I really ought to go check out the rivals, Koga. I hear they have an obstacle course you can try to become a ninja yourself.

Have you been to either place? Would you like to go?

One thought on “Ninjas, ninjas everywhere! (An Iga Ueno adventure)”