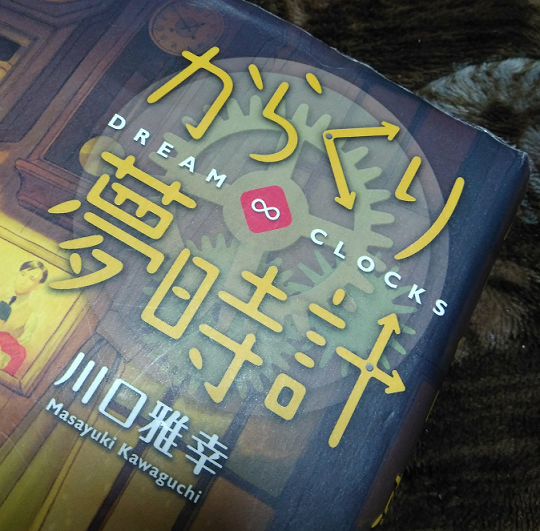 I am one of those people who refuses to stop halfway through a book unless it is truly terrible. I’m talking about, “My English teacher assigned a list of really boring, really horrible old books to read during the summer in the name of ‘expanding our horizons'” type of terrible. So when I pick up a book and it merely ranks a “meh” on my interest levels, I will be determined to plow through it.

Even if it takes me six months.

I feel like I’m treating this book unfairly by saying it merited just a “meh” from me. I’ll let you judge for yourself.

Meet Seiji. He’s an elementary school kid who lives with his father and older brother. His dad works in a clock shop in his town’s local shopping arcade, where everything is shutting down due to the giant supermarket that recently opened down the street. And he’s convinced that his family hates him.

Why else would his dad constantly be on his case to study? Why else would his big brother, who he calls 鬼いちゃん (Oni-ichan, little demon) rather than お兄ちゃん (big bro, also spelled oniichan) never come to see him during sports festivals or anything else that’s important to him? If only his mother, who died in a car accident when he was young, were still alive. Then surely things would be different.

Such begins the Christmas story where Seiji finds himself flung back in time to before he was born, where he discovers what makes his family the way it is now–why his father is so strict, why his brother is so busy, and the true fate of his lost mother.

The story is written for kids, and from the first person perspective of Seiji himself, so you’ll see lots of casual language and slang that boys use in this book. There are several recognizable tropes throughout the story, such as the past family not seeming bothered by this mystery boy appearing out of nowhere and staying with them in their house, or the mysterious old man who seems to know everything– or even the mystery voice that speaks to Seiji throughout his adventures. The story has a decent flow to it, but occasionally will devolve into scenes where Seiji is watching the adults talk about Adult Things (like the supermarket ruining the shopping arcade and the community) which I was sorely tempted to skip over.

These reasons, and generally my own laziness, is what made me take over six months to read a 403 page book I could have conceivably done in a couple months maximum, had I stuck to a regular reading schedule.

The more I read, the more I find my own interests and tastes in Japanese books evolving. I enjoy the stories with mysterious happenings, like in this one and in a book I read last year. I also usually like first-person POV. What I don’t care for is long monologues about situations that are not immediately relevant to the plot. This may admittedly be due to my still limited language abilities in Japanese, but I find myself facing this in English novels too. As a result, while I sometimes enjoy mystery novels, I don’t often go out of my way to read them.

Anyway, if you like time travel shenanigans with bittersweet endings and revelations, this might be the book for you. It was cheap (found in Book-Off for 200 yen) so do give it a go if you’re looking for something more fun to read than your JLPT essays.

Geared toward: Late elementary school and up. There’s kanji but most of it has furigana.
Level required to read: N3, definitely. Once I got into it I was reading it at a pretty fast clip.
Good for study: Not really. You might pick up some slang, though.
Length of time to read: Too long. I was super lazy.
Read it again: For me, personally, no. There are more interesting books out there for me.

One thought on “Dream Clocks: A book review”