In mid-May, I received a text from a friend out of the blue, asking if I felt like going to Kanazawa. I agreed, because hey, who wouldn’t like a brief getaway from everyday life? It was only after we’d decided on the dates and times that I paused and wondered, “What’s even in Kanazawa?”

Turns out, a lot.

As the capital of Ishikawa Prefecture, Kanazawa (金沢) has a lot going for it. If you’re coming to Japan and don’t have quite enough time to go through all the wonders of Kyoto, you can find a lot of what you’d be looking at anyway in Kanazawa. From old districts to temples to fancy Japanese-style sweets, there’s a lot to do.

And the best part is, you can do it all in twenty-four hours, if you plan ahead.

From Kyoto Station, I boarded the Thunderbird Express at around 7:30 AM, which arrived at Kanazawa station at 9:38 AM on the dot. It ran me 6,900 yen for a one-way reserved seat. If you’re coming from Tokyo, expect to pay closer to 14,000 yen on the bullet train. Unless, y’know, you’re one of those people who have a fancy JR Pass or something.

Upon arrival, I found that the city was.. surprisingly very English friendly. There were signs everywhere pointing the way to the main attractions. Staff at tourist desks spoke English and shoved maps in our hands for free that detailed all the top spots. We even hesitated once at an intersection for a grand total of three seconds and had a gentleman running across the street asking if we were lost.

Thanks to that, it was easy enough to hop on a bus and get to our first destination, Kanazawa Castle, which was conveniently enough right by Kenrokuen Garden. If you purchase a combo ticket for the two places, it’ll run you around 500 yen. Coming from Kyoto, where someplace like Nijo Castle will cost you 600 yen, this was a very pleasant surprise! 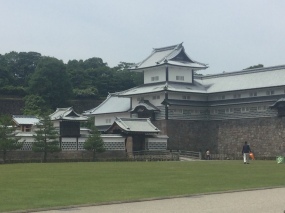 We started with the castle grounds, which took some walking to get up to. While the main castle itself is no longer standing, you can see and access two of the turrets, and the storehouse that connects the both. Entrance is included in the price of your ticket. Remove your shoes, and tread cautiously through the building. I say “cautiously” because those shiny wooden floors are incredibly slippery… especially when you’re just in socks. If possible, wear grippy socks, particularly if you want to climb the turrets–those stairs don’t mess around!

We spent an hour or so just enjoying the castle park and the views the turrets had to offer before making our way onward to Kenrokuen (兼六園). Constructed by the Maeda clan, this garden is large, sprawling, and called one of the “top three landscape gardens in Japan”.

All that for less than 5 dollars’ admission.

I strongly recommend you go on a weekday, if at all possible, because even on a Tuesday morning the gardens had tour groups wandering around. We managed to avoid the worst of them and still enjoy some quiet spots, mostly due to it being such a large place. There are certain spots laid out for the autumn maple leaves, and other places for plum or cherry blossoms. It looks like this would be a fantastic place to visit in the fall, especially, due to all the Japanese maple trees about.

We spent a good two or three hours, taking pictures and enjoying the warm weather before deciding food was in order. And wouldn’t you know it, just outside the grounds were a string of souvenir shops, all offering ice cream.

Yes, they take a standard soft-serve ice cream and wrap it in a thin layer of gold leaf. We were a little nonplussed by it all but knowing the outrage we would face should we not try it, we purchased a cone each.

Mine tasted like vanilla, and as though I had left a bit of plastic wrap on top of it. Overall inoffensive, but not sure what the fuss is about unless you’re just excited about having eaten gold.

A much more enjoyable dish there is, well, basically anything involving fresh seafood. We ducked into Omicho Market, a large covered shopping arcade filled with little shops selling basically any kind of fish you could imagine. There were also a few sushi places, so we popped into one and were not disappointed with the quality.

Once our bellies were full, we popped out to the Higashi Chaya District, a place famous for tea houses and performing geisha. Some of the teahouses are actually open to the public, should you opt to take a peek in them. There are also plenty of neat buildings in general to check out, as well as your standard souvenir and sweets shops. We found a fantastic shop that sold massive daifuku, of the strawberry and the pineapple varieties. It didn’t take long to walk around the entire area, and we were soon left feeling sleepy under the 3 PM sun. 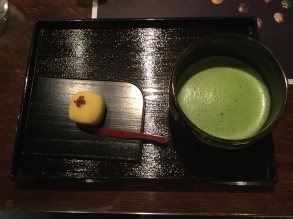 We could have spent the rest of the day at the 21st Century Museum, but by that point we’d been up since quite early and wanted to chill, so we went back to our hotel until dinner.

The next morning, however, we got up and at ’em again, for the last big item on our list: Ninjadera, or Myouryuuji Temple.

If you’ve been to Iga-Ueno or Koga ninja village, you may have experienced games or shows full of flashy tricks by people in black or dark blue ninja costumes. You’ll find Ninjadera much less flashy, and in fact, the staff will be very insistent in telling you that ninjas have nothing to do with this temple, thank you very much.

In my opinion, though, it is still very much worth visiting, if you have time for it.

Note: You need a reservation ahead of time. Call the number on the temple’s main website and ask for someone who speaks English (or have a Japanese friend call). You’ll need to tell them how many kids and adults are in your group, if you need a translator, what time you want to come, and what day. You can call the day before (that’s what we did) or even show up at the temple on the day of, but if you do there’s no guarantee you’ll be allowed in.

The admission fee is 1,000 yen, and gives you a 30 minute tour. It’ll start with you kneeling or sitting in the main hall, staring at the decorations within, as the tour guides play a tape (all in Japanese) reciting the history of the temple. This will take 3-5 minutes, just long enough for you to start wondering in growing horror if this is all the tour will entail.

Worry not, this will pass. And if you asked for an English translator, they’ll be muttering the translations to you the entire time so you won’t be completely lost.

Once it goes off, your tour group will be split in two. Listen for the name you put down for your reservation, and follow the tour guide who calls you. The real tour begins now.

This temple was built during a time period where the shogun put some very serious restrictions on buildings. From the outside, you’ll see a normal two-story temple. Inside? You’ll be led through four different floors, full of traps, secret entrances, and hiding spaces. The guide will show you how each were accessed.

The one thing that stood out most to me was when we were walking down a winding staircase and passed by a tiny, windowless Japanese-style room, through less than a full-sized door.

“That’s the Room Of No Return,” our tour guide said matter of factly. “When a samurai messed up badly enough, they were invited to go in there and take care of things.”

I peeked into that tiny space, lit only by a low light, and shivered.

While the cost of admission may seem steep, I was happy with what I got out of the tour. If you’re expecting ninjas, however, please don’t.. and please don’t ask them what ninjas lived there, either!

We ended our time in Kanazawa in the Nishi Chaya “District”, which was… basically just one street, and dead quiet compared to Higashi Chaya. It was nice for pictures, but not much else at 10 AM on a Wednesday. 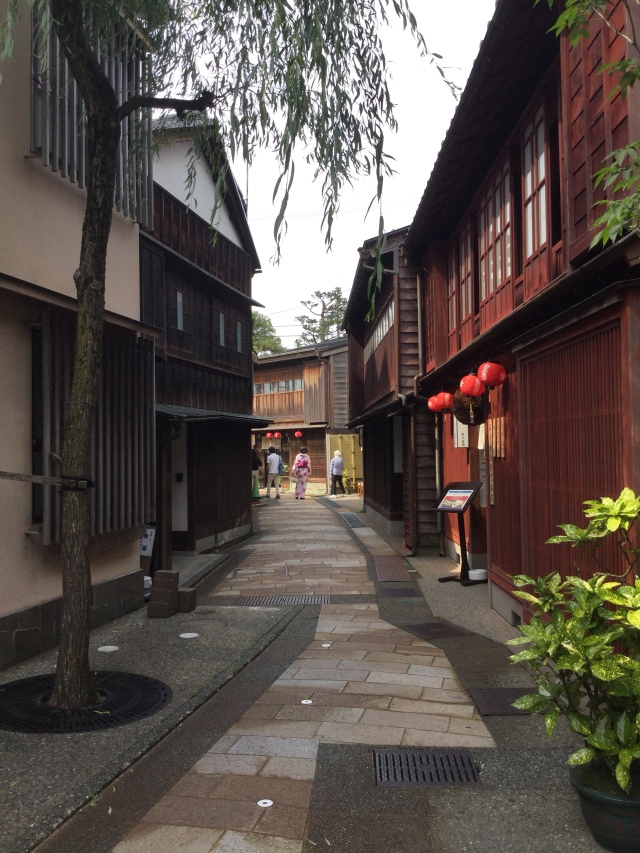 There are plenty of other things to do in town– shrines, museums, shopping–but within twenty-four hours of arrival we had already hit all of the places we wanted to see. It was a great treat to do an overnight somewhere relatively close, and I can’t wait for the next one.

Have you done any overnight or daytrips recently? 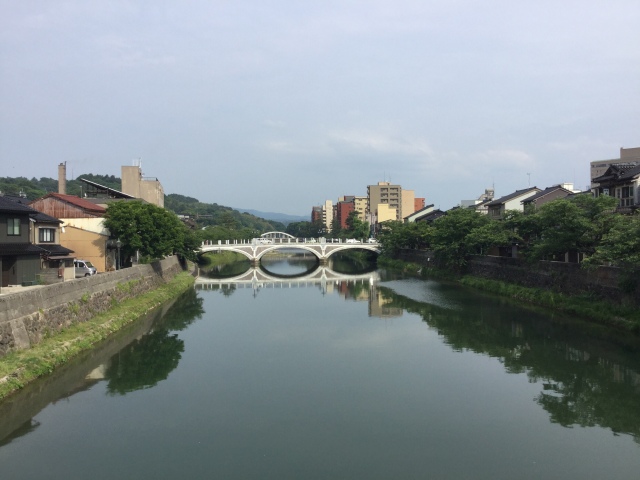