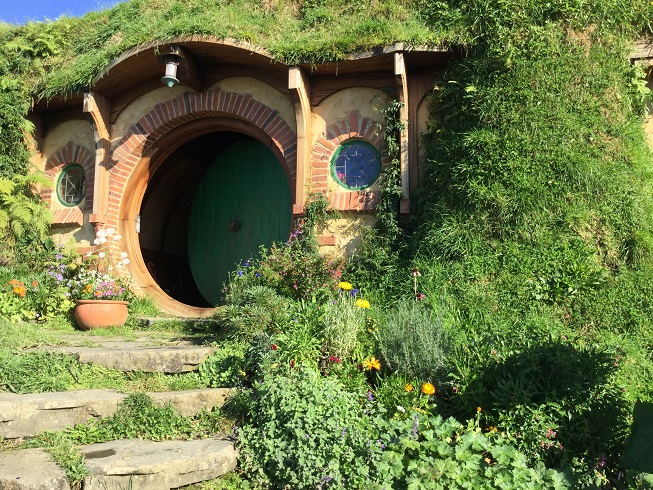 When I was seven years old, I got a basket for Easter from my grandmother. I remember it was pink, with a chocolate bunny, a couple of jelly beans… and my own paperback copies of The Hobbit, as well as the Lord of the Rings trilogy.

I read through Bilbo’s adventure, but couldn’t commit to Frodo’s (“Where the heck is Bilbo? I want more of him!” I thought sullenly) until I was a bit older. Even so, J.R.R. Tolkien’s stories have stuck with me. Am I a hardcore fan? Hahaha no, I’ve never read the Silmarillion and if you ask me to compare the minutiae between the recent movies and the books, you’ll get a quizzical smile from me at best.

But fantasy as a genre is something I grew up loving, and when I learned we could take a day tour to Hobbiton from Auckland, I was completely on board.

We signed up, not through the Hobbiton website, but through a separate tour company. It was a package deal where we could also see the Waitomo Caves in the afternoon, but you and I both know that’s not what you’re here to read about. Or look at.

Our tour company picked us up so early that we had to roll out of bed before 5am. It was dark when the tour guide rolled up outside of our hotel, and he was, honestly, far too awake for my liking. I spent the first hour or so blinking blearily at the countryside while he tried to engage us all in conversation and make us all feel like a team.

We left early enough to avoid the worst of the traffic in Auckland, and even had time to stop at a lookout on the way to Hobbiton. Our guide was disappointed at the mist, but honestly, I thought it was incredibly beautiful.

Our bus got to Hobbiton just in time to be the very first tour group going through that day. The entrance was marked with, of course, a gift shop, a cafe (on the second floor), and restrooms. I did my first round of shopping at the gift shop while waiting for our tour to take off, then got in line with the crew.

We had to take a bus to get into Hobbiton proper–Hobbiton is located in the middle of a massive farm, and the ride took about five minutes. Along the way, we were greeted with rolling hills and sheep. So many sheep.

Then, we hopped off the bus, pushed our way past some bushes, and there we beheld… Hobbiton.

I’m not exaggerating when I tell you that being in the first tour makes it feel like you are quite literally stepping into another world. One where, at any moment, those little doors will open and Hobbits will swarm you with offers of fresh produce and ale. The world was silent, with not a single telephone pole or car in sight. The gardens, we were told, were all real, and the workers are encouraged to take the produce home when its’ ready. There were so many details to take in that I’m sure I missed most of them.

Our tour took a leisurely path up toward Bag End, with the guide giving us plenty of chances to snap photos and explaining the “how” of everything… including the fact that one of the trees was fake. Can you guess which one?

After we explored Bag End, we made our way to the Green Dragon, where we were offered a complimentary drink. There were four drinks on tap, with one non-alcoholic option (ginger beer). I went for the non-alcoholic one, as it was only about 10:00 at that point and we still had a lot of sightseeing to do, but I was told by others that the ale was delicious.

We were given about a half hour to wander around the Green Dragon, sit in the chairs, drink our ale, and chat with the workers there. Despite it being a very short time, we didn’t feel rushed. I remember walking outside with my cup of ginger ale, breathing in the autumn air, and staring out over the rolling fields beyond Hobbiton. It was a really amazing moment I’ll be hard-pressed to forget.

(I’ll admit I’m a bit disappointed nobody sang Pippin and Merry’s Green Dragon song, but hey. We were all feeling the magic a bit too much for that, I s’pose.)

Overall, the tour was about two hours long, including the Green Dragon, and we were also given a chance to eat lunch at the cafe on the second floor. It had a surprising wealth of options, including a vegan wrap that was actually chock full of really tasty stuff. There were sandwiches, pastries, wraps, and a number of other things available. We ate quickly, visited the gift shop one more time, and before I knew it, it was over.

Have you visited Hobbiton, or any place like it? What were your experiences? Do you think it was worth it?