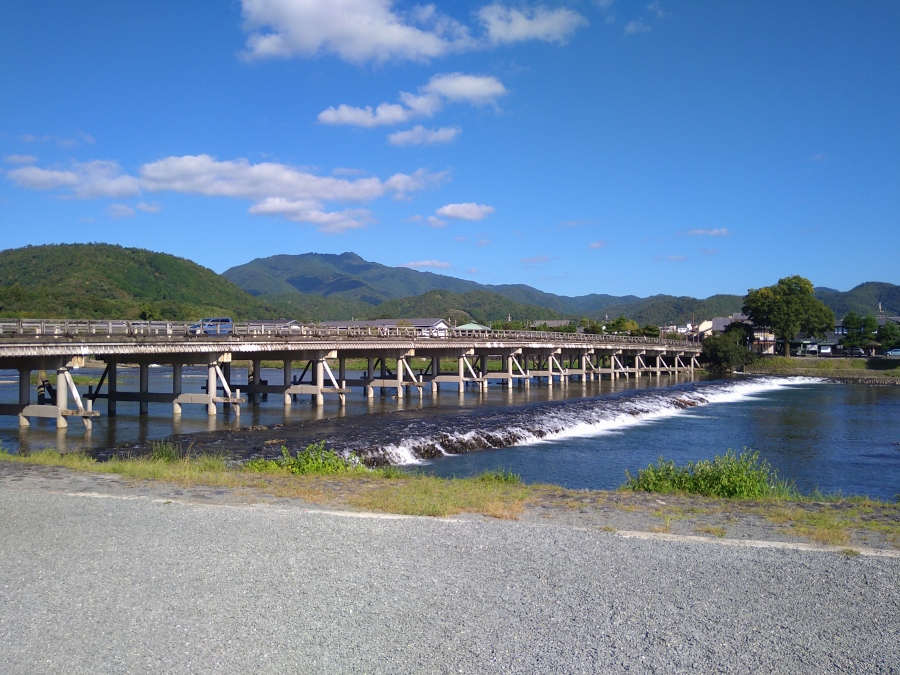 I was talking to a coworker the other day about tourist spots in Kyoto. When I mentioned how I missed seeing all of the local areas, my coworker shook their head. “You should go,” they told me, nodding emphatically. “Nobody’s around, so you get the whole place to yourself. It’s fantastic for pictures, and you can take your time there, too.”

Curious, I decided to see for myself. Armed with my vaccination status, a mask, and a fully charged phone, I ventured off to Arashiyama.

Located on the far west side of Kyoto, Arashiyama (嵐山) is accessible via almost any type of public transportation you can think of. Bus? Sure. Train? Yeah. Another train? Why not. Yet another train? Absolutely. Boat? Yeah, just go upriver a little ways.

It’s a tourist hotspot for very good reason. Not only is the area gorgeous, it’s home to one of the most iconic areas people imagine when they think of Japan: the bamboo grove. We’ll get to that in a second. It’s also home to a monkey park and several shrines and temples, along with a music box “museum” where you can sign up to make your own custom one. (Alternatively, you can just shell out big bucks for one of their very elaborate music boxes on sale.) Most importantly, of course, is that you can get not only matcha, but houjicha (roasted tea) ice cream, if it’s a hot summer day.

Keep in mind that, to limit crowds even further, I went on a weekday. I also went fairly early in the morning, as I arrived in Arashiyama a little after 8am. There was almost nobody around, as most residents had gone the other way on the train and bus routes for work, school, and other obligations.

And the place was silent.

There were three or four joggers and bikers, a couple of people in their gardens, and maybe one other person on the street. A few folks sat in the shade of the trees by the river, admiring the Togetsukyo Bridge (渡月橋), but it was the emptiest I’ve ever seen Arashiyama.

After admiring the bridge, I turned and headed down the road toward my destination: the bamboo grove. As it was before 9am, most of the shops on the street were shuttered, but I found myself wondering just how many of them would open by the time I was done with my little trek.

This was my first visit to Arashiyama in over four years. Before the pandemic hit, I had avoided the area because of the number of tourists, and then during the past couple of years I simply avoided any and all form of public transportation.

So it was bemusing to me that, despite having not been here in a while, my feet remembered exactly where to go even as my brain wondered if we were headed in the right direction. And, minutes later, I found myself at the entrance to the grove.

Reader, I walked into the shade of the bamboo, heard something rattling, and backed up again into the sunlight. A breeze blew by, shaking the bamboo trees so that they bumped into each other. It was a sound I had never been able to hear in the bamboo grove before. I stood there, listening, for a couple of minutes before a jogger came trotting past. Then, I headed deeper into the grove.

It’s not a very long walk through the main part, perhaps a couple of minutes if you truck it. But I was able to take my time. I stopped to listen every time the breeze came through, snapped more pictures than was healthy, and craned my neck up to see how the bamboo blocked out most of the sun… but let just enough filter through to make the place feel peaceful.

I flashed back on the last time I’d been in this grove. It was at night for the light-up festival in December. As a friend and I were walking, movement by my foot had made me glance down to discover a centipede (mukade/ムカデ) strutting its’ way toward me. I danced out of the way in surprise, and the creature didn’t so much as acknowledge me. It continued to march along, unbothered by the giants around it that yelped and jumped and did everything they could to avoid being near it.

Imagine having that sort of fearlessness.

The memory made me glance down and around. No sign of insects. I was safe.

So I kept on marching, myself.

The path winds around, then uphill a ways until it branches off in two directions. There are chances to pop into several temples and peek into several shrines along this route– you’ll have to pay to enter the temples, but if you’re looking for a quiet garden or a chance to admire some architecture, it’s a good call. Today, I decided I was here for nature and kept going my own way.

An older woman with the best posture I’ve ever seen in my life marched past me as I lingered at one point. She had a hat, a mask, gloves that covered her arms, and long pants on, and had walking sticks in either hand. She offered me a quick, sharp nod, never slowing in her walk, and I wondered if this was a walk she did every day. Imagine, being able to see this every morning. I wonder how she feels about the lack of tourists– did she always walk here? If so, did she use to get up at 4am to avoid the crowds? Or did she plow through them as fearlessly as the mukade had?

There are a few spots to keep an eye out for along this route. At one point or another, the bamboo will give way to other trees, and you’ll find residential areas. Some of them have signs that indicate private property, including in English. Try to avoid taking pictures there and move along, there’s plenty to see, anyway.

I found myself mentally hesitating at certain intersections, but my feet continued to lead me on without any break in my step, knowing how to get me back to civilization and the river.

And, about an hour after I’d headed off for the forest, I found myself back in the souvenir shop area.

Some shops were opening. I saw displays for ice cream being set out, shop clerks tying aprons on as they chatted, and a few more clearly non-residents on the street. Time to head home.

There are, indeed, very few people at these normally packed tourist spots, so if you live in the area, it’s worth popping by a sightseeing spot that maybe you’ve put off for whatever reason. Maybe it was too crowded; or perhaps it simply wasn’t high on your to-do list. In any case, I recommend checking things out. You don’t even have to get up at 5am for a relaxed, private experience like you might have had to in the past!

Have you visited any local sightseeing spots lately? Were they similarly quiet, or did you end up having to elbow your way through other people? Where do you want to go next?

One thought on “What are the tourist spaces like now? Arashiyama edition!”