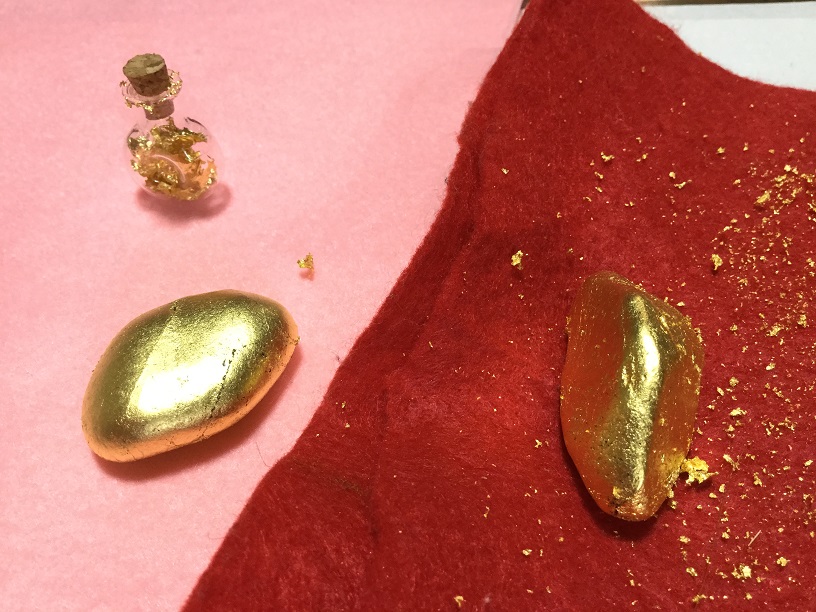 Back in March, I participated in a writing competition through Writers in Kyoto. While I didn’t win, I was invited to take part in a local cultural event of some sort. There were two options to choose from: paper lantern-making, and gold paperweight-making. After choosing the latter, I arranged to meet a woman I’ll call Ms. S from the Kyoto Convention and Visitors Bureau at JR Yamashina Station. From there, she would make sure I made it to the workshop and, if necessary, provide translations.

While it was meant to be a group outing, it turned out to be just the two of us on a search for the home of an うるしさん (Urushi-san, someone who works with lacquer/gilding). Urushi-san are the people responsible for things like the gold you can see on Kinkakuji Temple in Kyoto; they affix things like very thinly sliced gold to various objects (whether it’s magnets, toy cars, or anything else you can imagine). Of course, they do many other jobs as well, but this was particularly pertinent because the workshop centered around gold leaf stamping.

This was both my and Ms. S’s first time heading into this particular neighborhood of Yamashina. While only ten minutes by taxi from the JR station, we were in a very residential area where the streets had no names listed and the house numbers were all out of order. After the taxi drove off, we had no idea where to go, and unfortunately, neither did the neighbors we asked for guidance. Fortunately, Ms. S had a phone number, and after calling it, my teacher for the day came bustling out of a building from the end of a dead-end street.